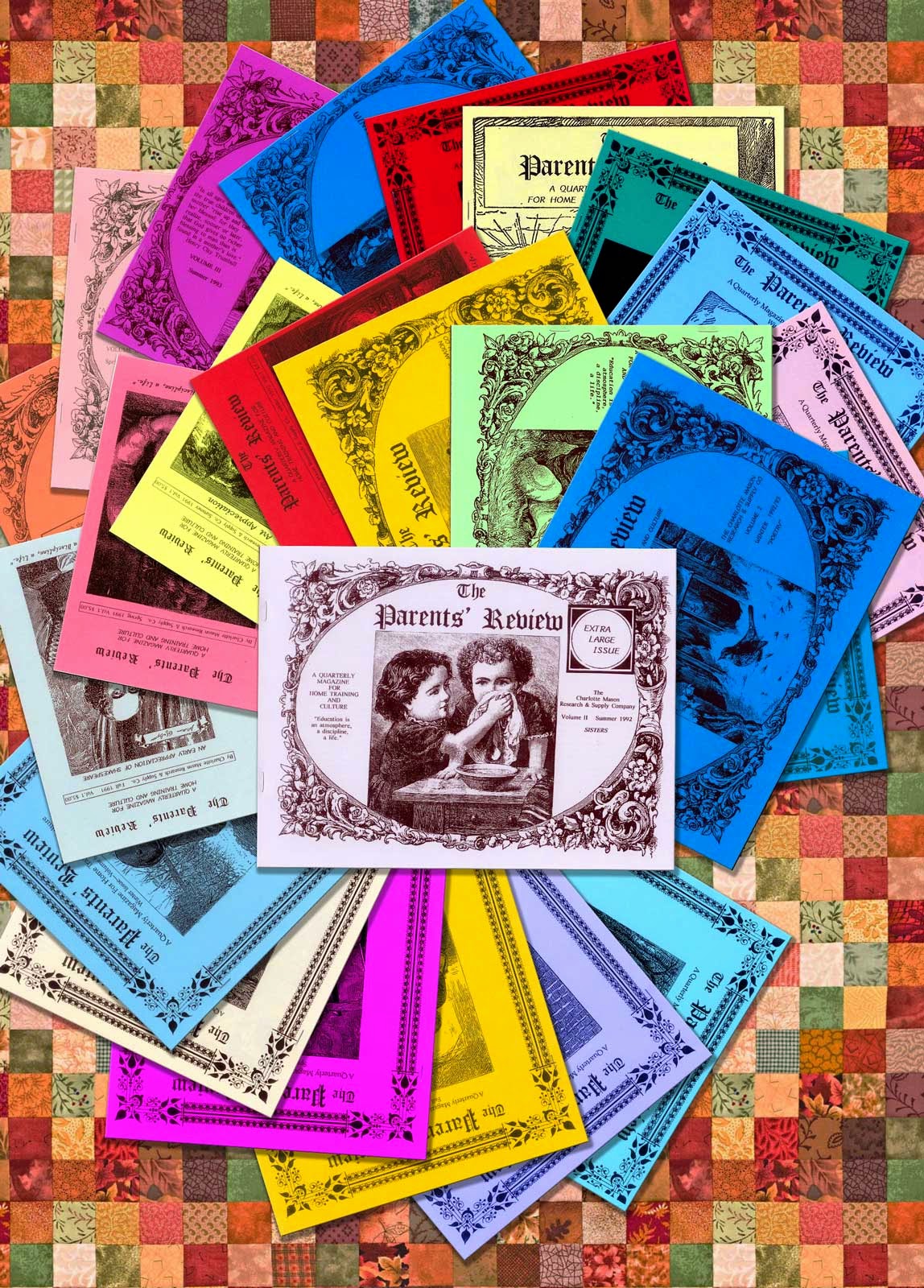 A Quarterly Magazine for Home Training and Mother Culture®

These magazines are temporarily out of stock and should be available to order sometime within the next few weeks.

Below is a partial list of contents. Some of what was incorporated into A Charlotte Mason Companion is unlisted. My goal of editor was to mingle ponderous articles (of article-standard-length) with lighter ones. The mini biographies could be read aloud to children or would contribute to a teacher’s background knowledge and feed enthusiasm.

What you will receive is unchanged from the original 1990’s issues, with nostalgic black and white pictures on nearly every page, and advertisement-free, – except for a few book reviews. The later issues are 40-plus pages each. 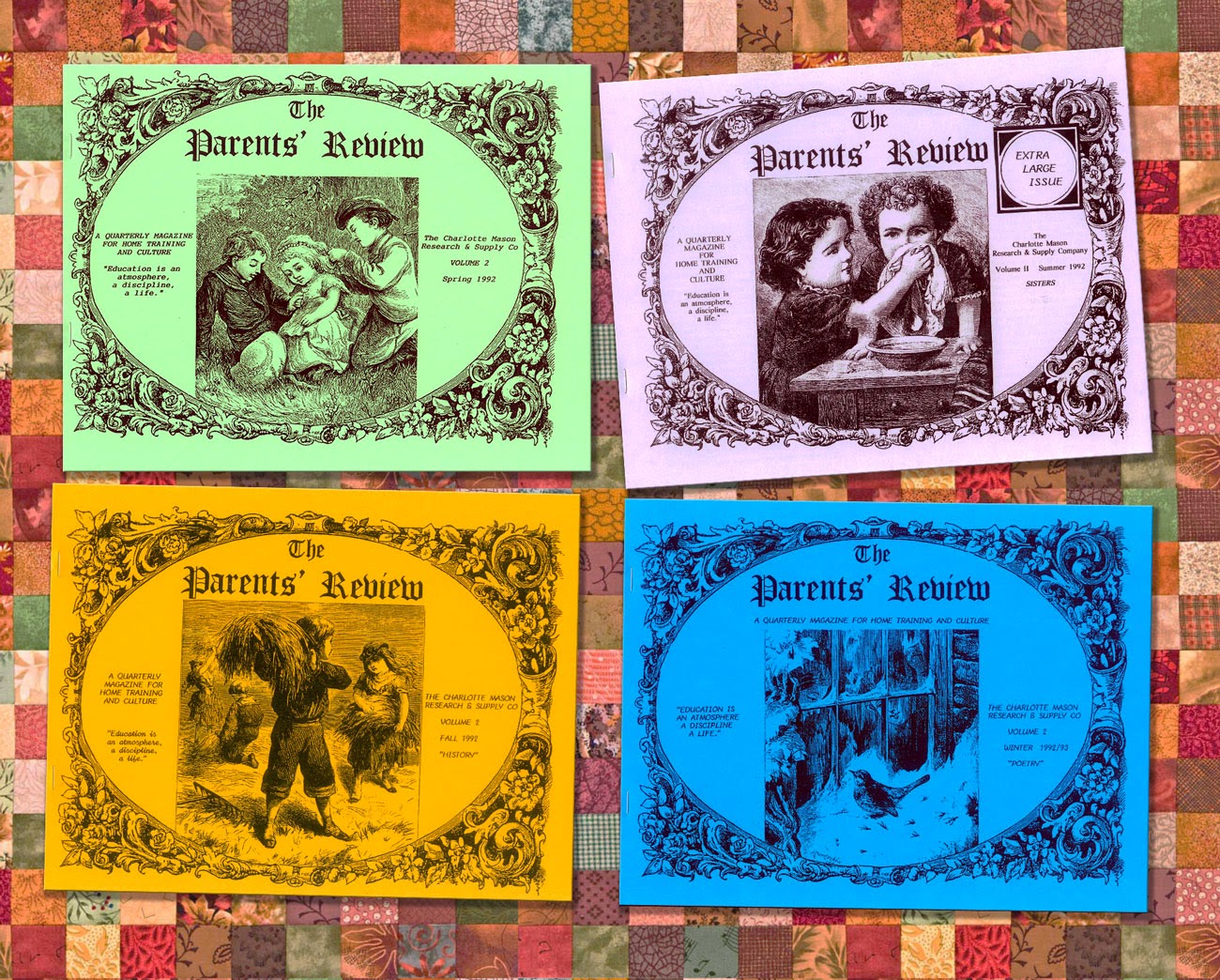 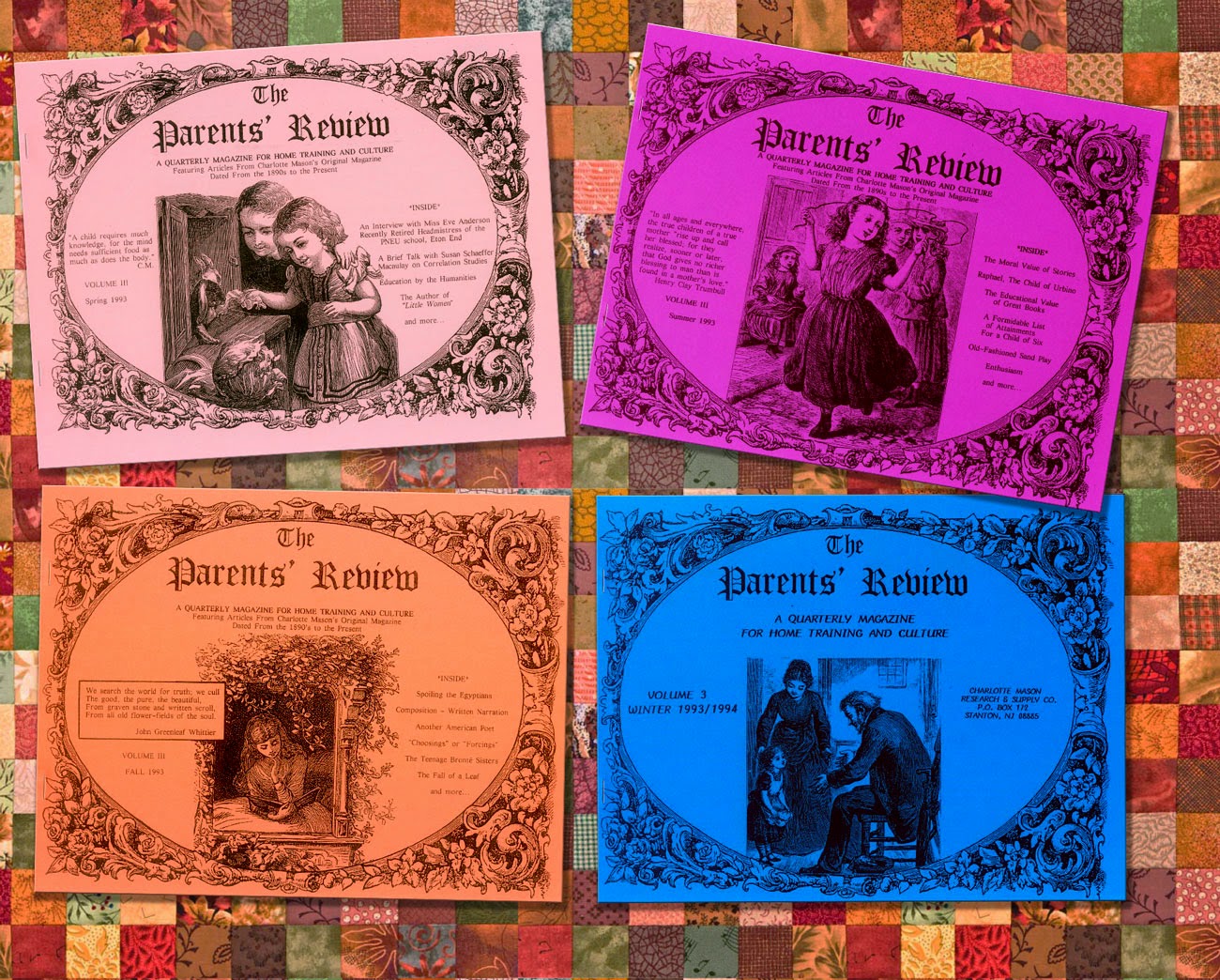 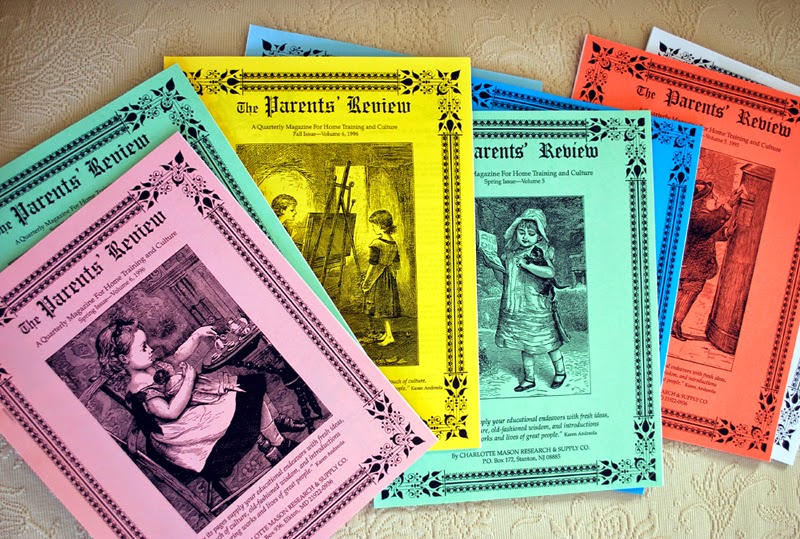 “What’s this?” I exclaimed with hands-on-hips. I was thinking out loud. My little girls were playing nearby. Overseas Federal Express dropped a pile of old whiskey boxes at the backdoor. One ragged box had a hole. Through the torn cardboard I could see that the boxes were heavily laden with hardcover books. I read the bill. It was 600 dollars. Perturbed, I telephoned my husband Dean at the office.

“Is everything alright?” he asked.

I told him what sat at the backdoor. I hoped the Tennessee clouds wouldn’t send their usual downpour of spring rain. Expecting a baby any week I couldn’t carry the boxes indoors.

After a brief pause to collect his thoughts, Dean said, “I distinctly remember asking the librarian at the archive for a few of the earliest years of Parents’ Review. That’s all. Just a couple sample years, when Charlotte Mason was the editor. And to send them surface. I never thought the librarian would send them all. And at such an expensive rate as Fed-EX air.”

“The bill is almost one month’s rent,” I said, with a flair for stating the obvious, and with more than a hint of stress in my voice.

He took a breath. “There must’ve been a misunderstanding.”

“Yes. Well. If you ask me, your English and the librarian’s English are
two different languages.” 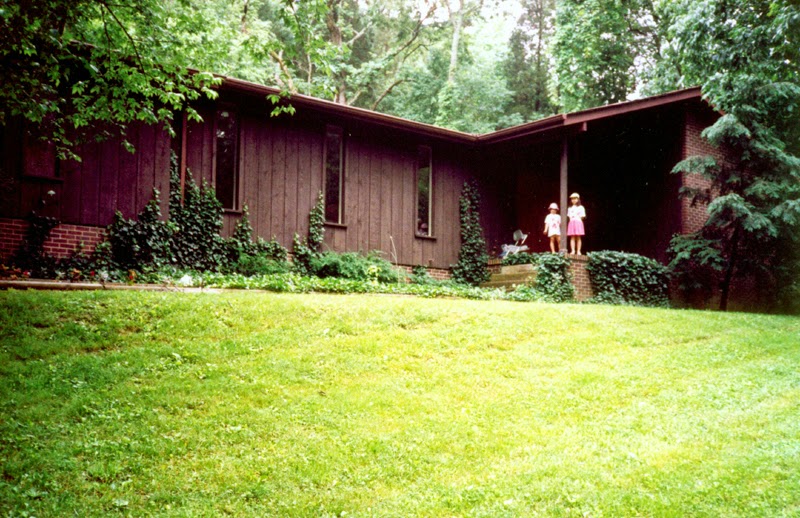 It was 1989. We were tightly getting by on one income. We had one car that Dean drove into the city of Nashville daily. I was sort of marooned in the ranch house we rented. It was in the woods. No one apparently wanted to buy it. We were told it was for sale for a long time – possibly because the house was half garage. The garage was huge. The kitchen was tiny and dark with dingy brown wallpaper. Most of the rooms had solid paned windows that didn’t open. The long driveway, as steep as a roller coaster rail, dipped down at the creek, then up just as steeply to the street. 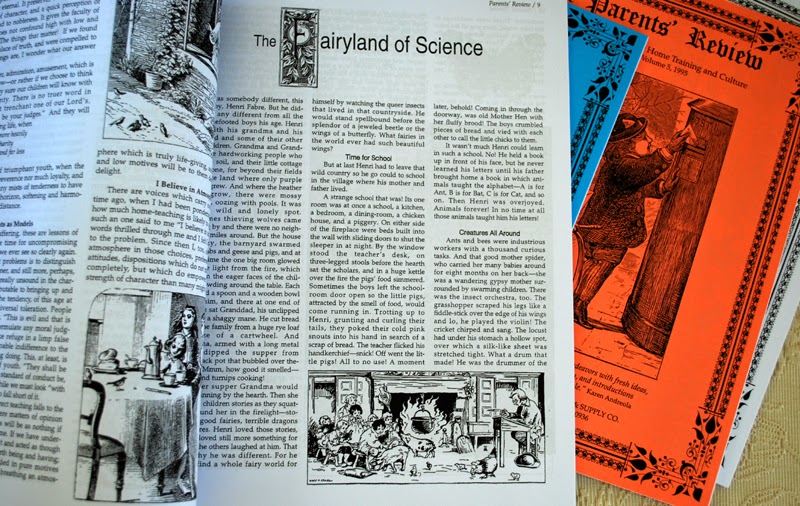 But there were things we liked about the place. The trees gave us shade. The weedy areas had stick-bugs and wildflowers. The sandy creek had crayfish and turtle hatchlings to observe. Our sparsely furnished family room offered the children room enough to play and one sunny window – a sliding glass door.  Although furniture was sparse, we were surrounded by an abundance of books, art supplies, dolls, blocks, wooden puzzles, and audio cassettes. And there was always the odd cardboard box awaiting discarding. 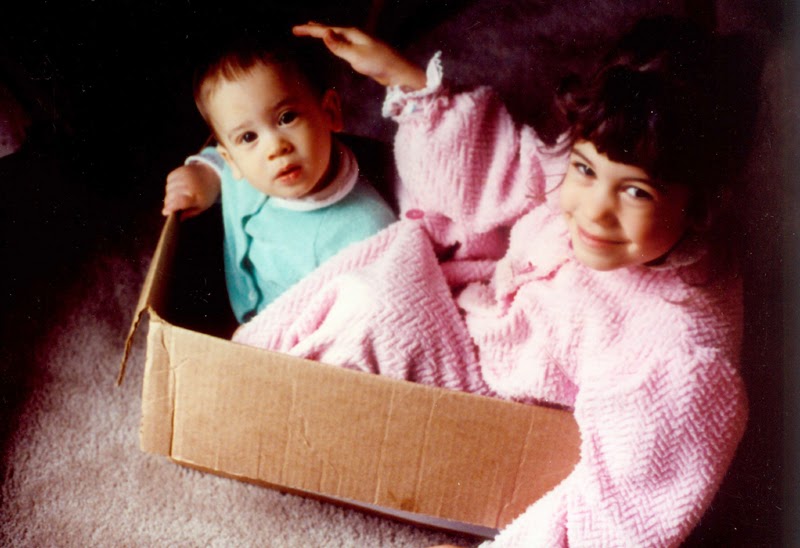 Dean cringed at the state of the wobbly whiskey boxes when he saw them. The hardcover bound volumes looked to be loosely thrown in. They could easily have been lost in shipping. Dean paid the bill. He set up a bookshelf. And I carefully checked each volume to make sure all the years were accounted for. It took the space of four or five sets of encyclopedias. “How on earth will I ever find time to read all these?” I thought.

Heavy with unborn baby, I put my feet up on the sofa each afternoon. While the girls were occupied – I would reach for a copy of Parents’ Review and hold its small print before my eyes for ten minutes. I already had a stack of books by the bedside such as Miss Charlotte Mason’s 6-volume set that we had brought back to America. It was forming a rather long queue.

I scanned the pages of Parents’ Review, stopping at what caught my eye. Never had I read articles so unusual, so meaty, so British. I sipped the paragraphs like tea. It gave me something to think about while standing in front of the kitchen sink full of soapy dishes or baskets of clean laundry overturned on the bed. Sometimes ideas rolled over in my mind while the girls were in the bathtub. “Education is an awesome undertaking” was my overall impression. But there was something so invigorating and curiously inviting about the high ideals. 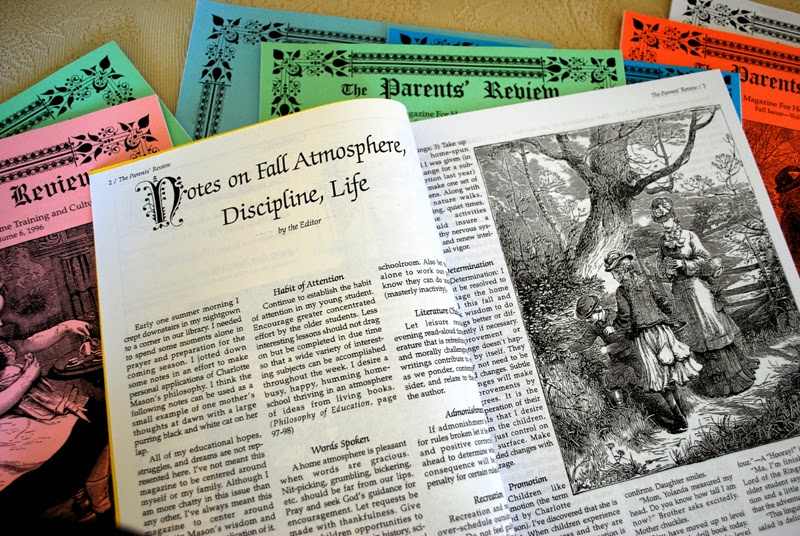 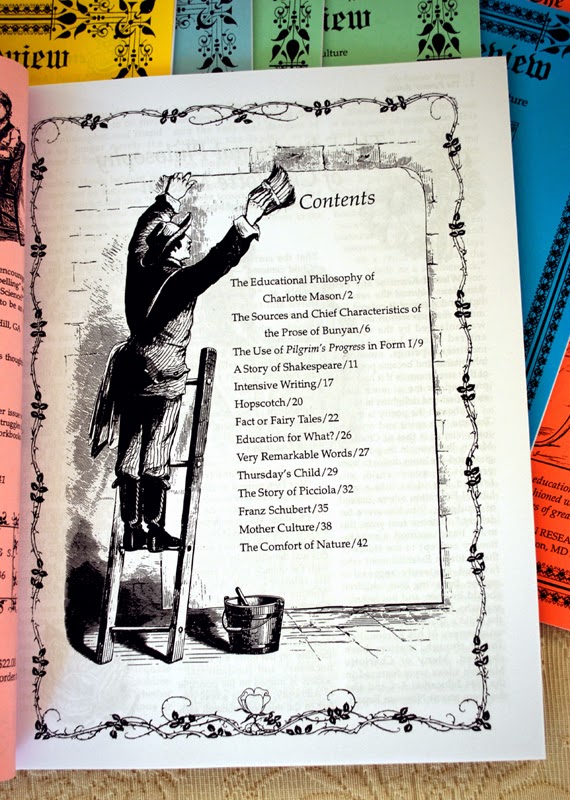 When tackling anything high or big, it is best to just get on with it, bit by bit. So I started plodding. As the saying goes: Inch by inch it’s a cinch, mile by mile, it’s a trial. Here and there I would experience a sense of fulfillment. It told me, that’s enough. Stop reading. It’s time to put these appealing ideas into practice – somehow – even by trial and error. It didn’t matter that I felt an awkward lack of confidence. (This was to be expected. After all, I hadn’t received an education like it myself.) The attractiveness of the ideals drew me forward. And I knew that anything really worth doing is worth doing not-so-very-well, at least at the start.

I mulled over that irksome Fed-Ex bill. Women tend to brood and plan. And I’m one of them. After praying about the situation I came up with a suggestion. Perhaps I could recoup our outlay by photocopying choice articles and offering them for sale to anyone interested.

With this aim in mind, and with the girls and the baby tucked into bed for the night, and Dean out of state on business two weeks out of the month, I sifted. I bookmarked. I scribbled notes. The articles stimulated my mind in many directions. This is precisely what its editor, Miss Charlotte Mason, originally meant them to do. It was a sort of blessed enlightenment. By 1991 I had selected a variety of topics for the first issue of my own magazine. Would my fellow home teacher find them to be of mutual encouragement? She did. She was hungry for inspiring ideas.

On the cover of PR I placed this phrase:

“May its pages supply your educational endeavors with fresh ideas, a touch of culture, old-fashioned wisdom, and introductions to enduring works and lives of great people.”

I embellished my magazine with antique black & white book illustrations and related research. As insights unfolded from what I was learning from Miss Mason’s books, unknown to me, I was laying the groundwork for the chapters of A Charlotte Mason Companion and for spreading ideas far and wide. Today it is amazing to see the fruition of seeds sown in the 1990s. 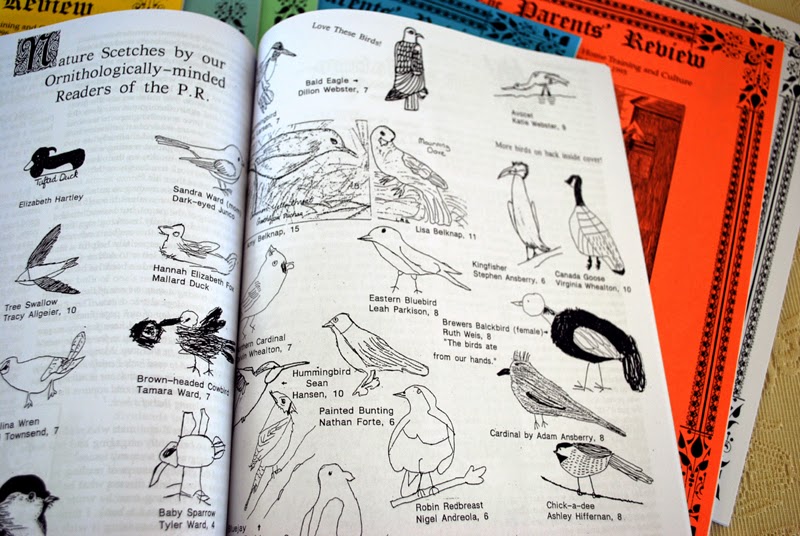 Cut & paste was the way to do a homespun magazine on the kitchen table then. It was the early days of the home-learning boom. Reading material for home teachers was scarce. Consequently, friends told friends about Parents’ Review. In a couple of years I had hundreds of subscribers who were looking to give their family a Charlotte Mason Education. 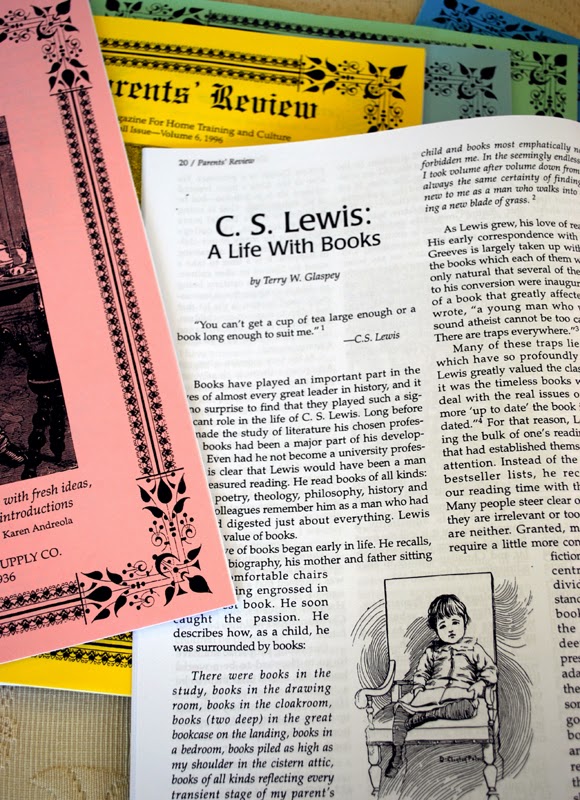 We recouped the Fed-Ex charges after several years of work. Eventually, we mailed the volumes back to the British library surface rate, wrapped snug and secure for travel. I remember standing in our dinning room in Maryland, finding myself giving every volume, one by one, a tender pat-of-the-hand in farewell, as I fitted it into its box. I had grown rather attached to them. 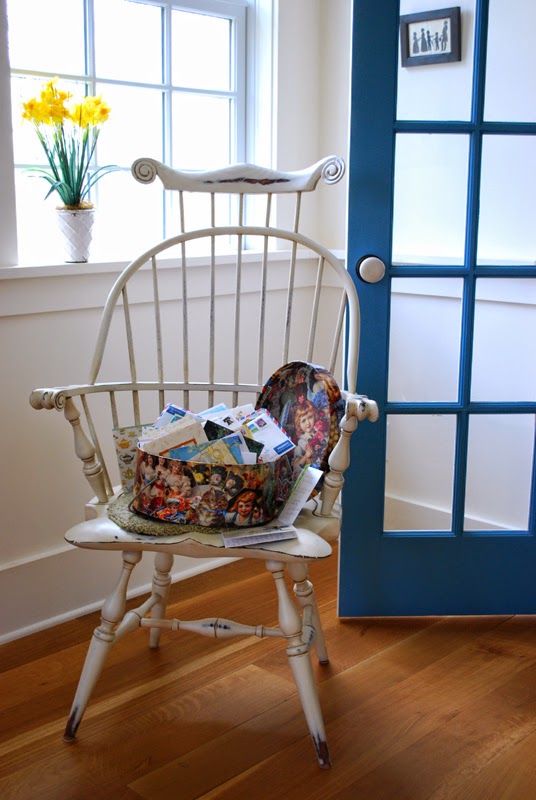 As editor of Parents’s Review (1991-1996) I answered hundreds of paper letters from America and some from overseas. (Some I still save in an ornate hatbox.) During those years my husband, Dean, changed jobs three times. Our family made seven household moves. But never was there any feeling of hurry to contend with. The quarterly schedule was a nice pace.

When we lived in Oregon, Sue, a fellow home educating mother, told me that her husband knew computer layout and could “make” the magazine for us. Wonderful news. No more cut & paste (1994-96). These issues that were on disk were lost. We have wondered what to do with the paper masters of our six years of back issues. PDF is hard to read and with most of the issues at 40 pages, the file would be enormous. So we’ve kept them in their original state. And although the cost of printing since the 90s has increased more than tenfold, we’ve kept the cost of each issue the same for our new readers. 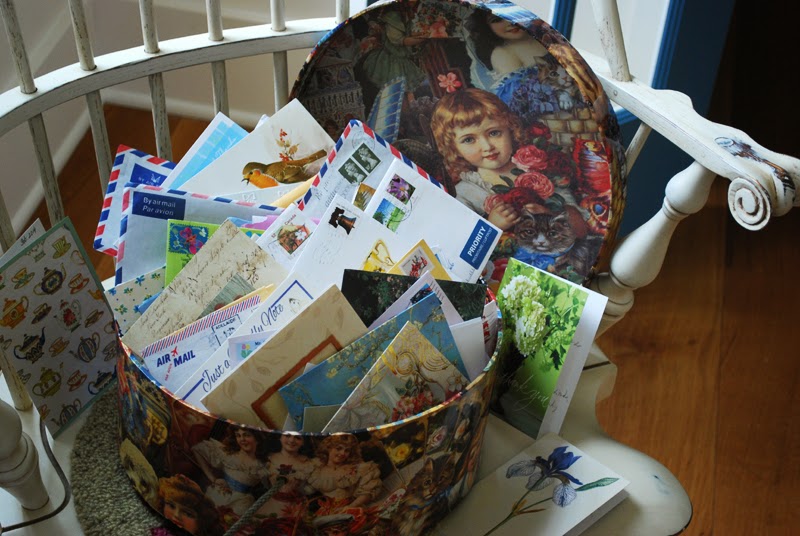 Apart from the odd book review, the pages of Parents’ Review are advertisement-free. Friends still tell friends. Curious moms find us. Therefore, those six years of Parents’ Review have never gone out-of-print. Here is a photograph of the oak bookcase built into our office/family room in Maine. We’ve since downsized our library but appreciated, then, having such an expansive accommodating arrangement. You can see Parents’ Review stacked horizontally at the left. Apparently, there are some people who still like to recline peacefully with paper in hand. I do. 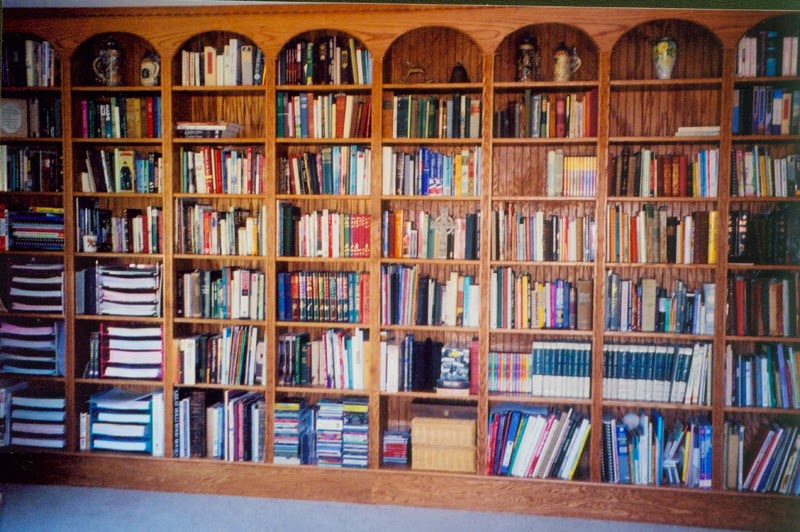 Thanks for allowing me to share my story in words and pictures. 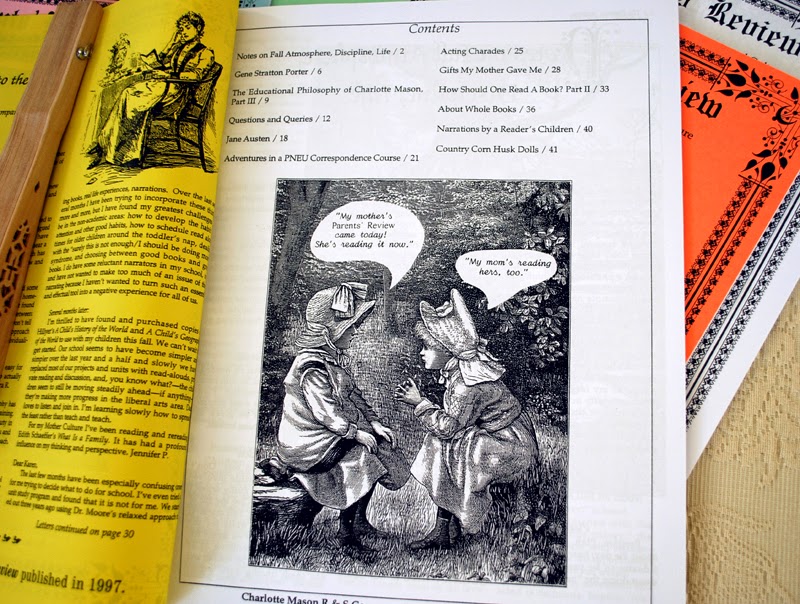 Back to the Top 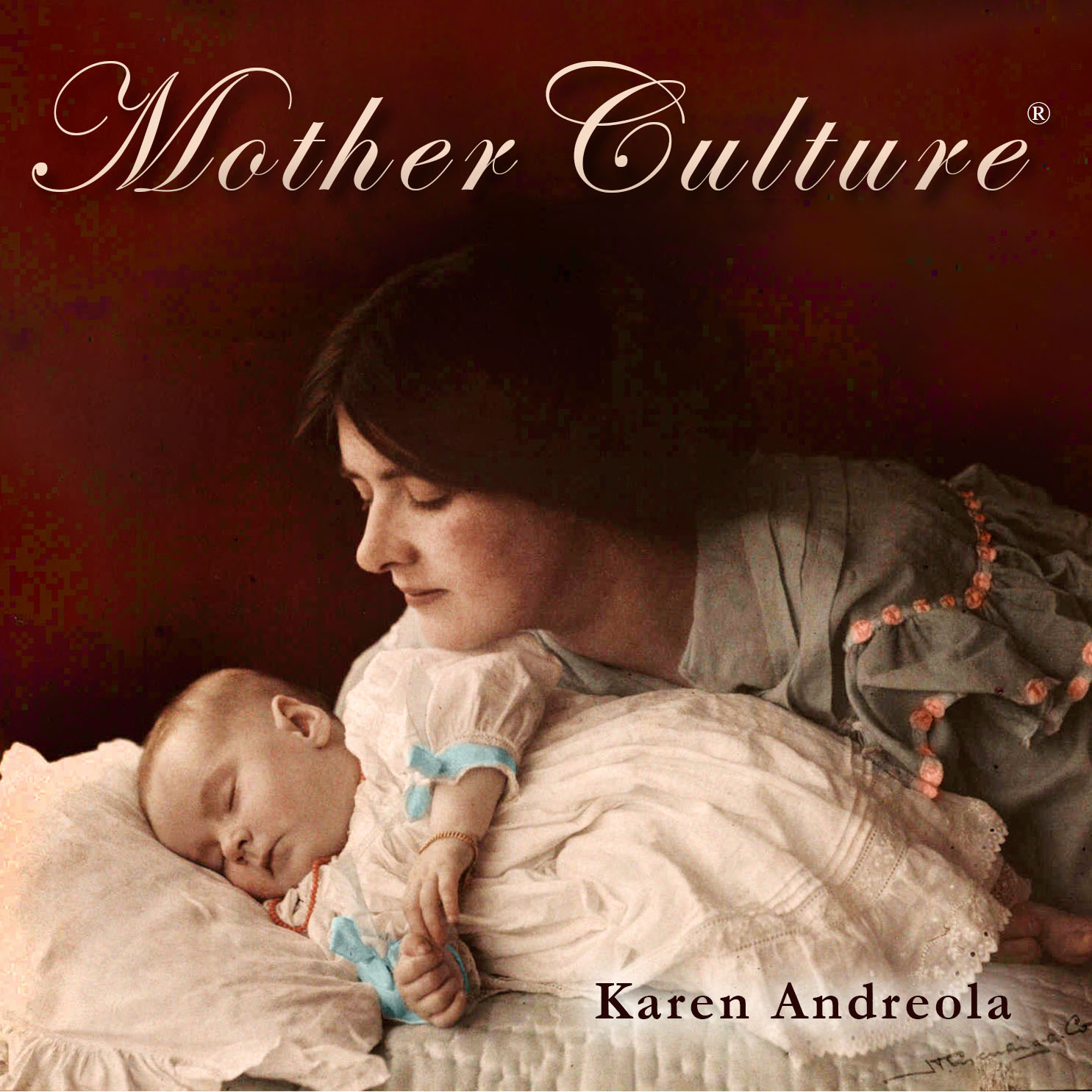