Publishing The Original Homeschooling Series was our first contribution to the homeschooling movement. After a long run, our edition is now out-of-print. It’s hard saying goodbye. Do you have a minute for me to share our story with you of its beginnings? The photographs in this post were taken during our year of Christian literature missions with Operation Mobilization – based in Bromley, England.

A Light in The Dark

Once upon a time, British educator Miss Charlotte Mason (1842-1923) was not a household name with American home educators. That was about to change.

It was midnight. All was quiet. The room was dark. I was sitting in a little pool of light reading Home Education by Charlotte Mason. I had finally got hold of a rare copy by way of London’s inter-library loan. Intrigued by what I had read that winter of 1986, in Susan Schaeffer Macaulay’s book, For the Children’s Sake, I longed to read more. My children were young. We were Americans living in the London suburbs far from the dawning homeschool movement back home.

In search of any and all books written by Miss Mason, Dean telephonedevery used bookshop in Great Britain. To no avail. Next, Dean tracked down the last British publisher of Miss Mason’s books and gave them a call. A salesman told him that they had just relegated a warehouse full of Miss Mason’s hardcover books “to the bin” (a dumpster in this case) due to lack of sales. “If only you would’ve rung up two weeks ago. I could’ve sold ‘im to you cheap. We’ve been sitting on ‘im since the 1950’s.”I longed for a copy of Home Education of my very own. Miss Mason’s wisdom gave me the practical direction I craved. At first, I found my reading of it to be a little of an awkward experience (she wrote Home Education 100 years prior). Yet her words were welcoming, confidently authoritative, and assuring. This kept me reading. She made me want to step out and try what she so ardently advised. Thus began my husband’s amazing quest.

Just as Dean was about to give up, an elderly book shop owner told him, “Haven’t seen any of Miss Mason’s works for years . . . but have you tried the Charlotte Mason College?” A stunned silence followed. We were unaware that such a place existed.

In the early spring of ’87 Dean was away on business for the Christian literature mission he worked with. Travels north brought him near Scotland’s boarder, and as Providence would have it, the Lake District of England; home of Beatrix Potter, William Wordsworth and . . . the Charlotte Mason College. After booking into a B&B in the quaint village of Ambleside, he stepped into the college library and asked the librarian to direct him to the works of Miss Charlotte Mason.

“Oh, we don’t keep them out here,” the librarian said, waving a hand toward the shelves all around the room. “Not much interest these days. I’ll get the set out of the vault if you care to sit with them for a bit.” And sit Dean did . . . for the next several hours . . . wishing that I were beside him to enjoy the moment. He wasn’t watching the clock. After closing his eyes and rubbing his forehead he got up and found the librarian again. He hazarded to ask if he could borrow the books. The librarian strictly informed him, “It’s the only complete set we have, and they’re not for loan.”

Having come so far Dean was not ready to call it quits. He said, “May I have a word with the college president, if he is available?”

“He sees no one without an appointment,” came the reply.

“Tell him that I represent publishers in the USA who may wish to reprint these books and I would be delighted if the president would consider writing the forward.”

The librarian dialed the president’s office from a short-corded wall phone. With his back turned, he spoke in hushed tones. Dean waited, composed but a little anxious, straining his ears for what he hoped would be good news. He didn’t wait long. Soon after he was met squarely with, “Dr. Thorley will see you in five minutes.”

Dean spent the next hour with cheerful, gracious Dr. John Thorley, a Greek and Medieval history scholar, who exhibited a rare enthusiasm for educational reform. He was more than happy to give Dean a walking history of the school, a brief biographical sketch of Miss Mason, and finally to his delight, a package containing all six of Charlotte Mason’s rare out-of-print books – on loan from the archives.

Our mission term ended that spring. We headed home with one of the only complete sets of Miss Mason’s books. It was nestled securely in a carry-on flight bag – not a suitcase. Dean would not entrust them to any airline baggage handlers. Back in the States Dean was in communication with Christian publishers to see who would take on the expensive and risky project of reprinting the entire six volumes in a box set. After months of rejections one publisher agreed. And in 1989 The Original Homeschooling Series was published by Tyndale House with Dr. Thorley’s forward as promised. Tyndale House kept it in print a few years. After this we took on the printing – although the cover remained the same. Only in its latter years did we bother to make the change to our logo.

To Learn it and Live It

Years of endeavoring to work out what I understood from my reading followed. In the 1990s we hosted a monthly CM home discussion group, edited and mailed out a quarterly CM magazine (Parents’ Review),  and Mary Pride asked me to become a columnist for her Practical Homeschooling magazine – which enabled me to offer my personal interpretations of the CM method to her readers.

“She never quite leaves her children at home, even when she doesn’t take them along.” Margaret Culkin Banning

We were invited to speak at conferences. Although I practiced my speeches, a shy person addressing a large crowd is unmistakably challenged. Dean, however, is a natural at it.  Anyway, under the heading of “The Gentle Art of Learning™,” I think we were able, happily, to make Miss Mason’s practical philosophy approachable to our eager listeners. During those few times a year that we flew out-of-state, leaving our children at home, I remember having to remind myself often that they were in good hands with a young couple from our church. And it helped to knit mittens on the airplane between short prayers. (Can you, too, relate to the above quote?)

In ’97 I finished writing A Charlotte Mason Companion. A movement was emerging. Today by way of the Internet, many voices are spreading the message. It’s marvelous. Miss Mason’s simple, yet straightforward method is being employed with freedom and success in homeschools and a growing number of private schools. For those who have the courage to trust in the natural, God-given curiosity of their student – a burden is lifted. A new refreshing learning experience awaits all who follow what I call “The Gentle Art of Learning™.”

Charlotte Mason’s ideas are being passed friend-to-friend, mother-to-daughter. I now hear, “My mom read your book.” Miss Mason could not have known how her wisdom would be enthusiastically welcomed by tens of thousands of American families a century later. Thank you Susan Macaulay for introducing us to her. Thank you Dean for finding her writings and keeping them in print for more than twenty years. Thank you Mary Pride for inviting me to write in Practical Homeschooling back-in-the-day.

My gratitude also goes out  to my blog readers who have shared their copy of A Charlotte Mason Companion or a book from The Original Homeschooling Series, hosted a discussion group, or have passed along Miss Mason’s helpful ideas to a lonely, overwrought mom. Let’s keep encouraging one another. Good ideas given in friendship go a long long way. Apostle Paul tells us that what we do out of love abides. (1 Cor. 13:8,13). I have the gray hair to have lived long enough to witness this. 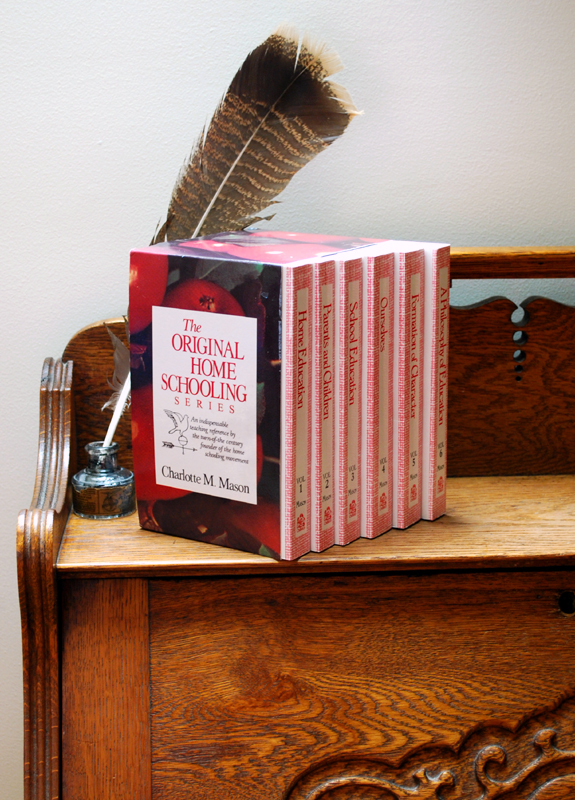 A few remaining sets of Original Homeschooling Series are on our shelves. The set is a rare facsimile of Miss Mason’s books (a faithful word-for-word rendering – not retyped or edited) We also have individual copies of Home Education (Vol 1.) and copies of A Philosophy of Education (Vol  6.) The set is expensive. For information on purchasing email: karen@charlottemason.com

The new name of our company is Charlotte Mason Research (LLC). We shortened it.